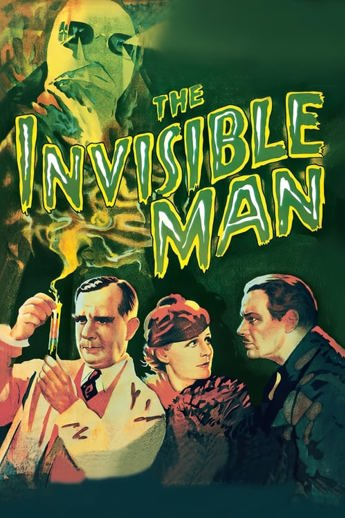 Catch me if you can!

A mysterious man, whose head is completely covered in bandages, wants a room. The proprietors of the pub aren't used to making their house an inn during the winter months, but the man insists. They soon come to regret their decision. The man quickly runs out of money, and he has a violent temper besides. Worse still, he seems to be some kind of chemist and has filled his room with messy chemicals, test tubes, beakers and the like. When they try to throw him out, they make a ghastly discovery. Meanwhile, Flora Cranley appeals to her father to do something about the mysterious disappearance of Dr. Griffin, his assistant and her sweetheart. Her father's other assistant, the cowardly Dr. Kemp, is no help. He wants her for himself. Little does Flora guess that the wild tales, from newspapers and radio broadcasts, of an invisible homicidal maniac are stories of Dr. Griffin himself, who has discovered the secret of invisibility and gone mad in the process.