Movies / Indiana Jones and the Kingdom of the Crystal Skull 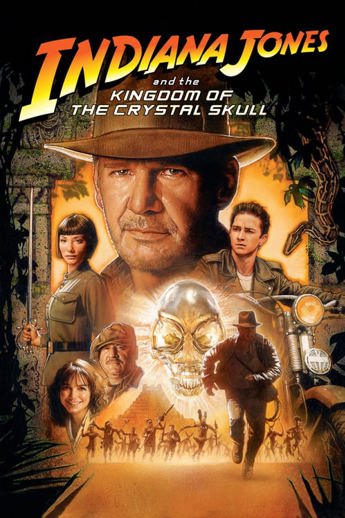 Indiana Jones and the Kingdom of the Crystal Skull (2008)

During the Cold War, Soviet Agents watch Professor Henry "Indiana" Jones, Jr. (Harrison Ford), when a young man brings him a coded message from an aged, demented colleague, Professor Harold Oxley (Sir John Hurt). Led by the brilliant Irina Spalko (Cate Blanchett), the Soviets tail Jones and the young man, Mutt Williams (Shia LeBeouf), to Peru. With Oxley's code, they find a legendary skull made of a single piece of quartz. If Jones can deliver the skull to its rightful place, all may be well. But if Irina takes it to its origin, she'll gain powers that could endanger the West. Aging professor and young buck join forces with a woman from Jones' past, Marion Ravenwood (Karen Allen), to face the dangers of the jungle, Russia, and the supernatural.